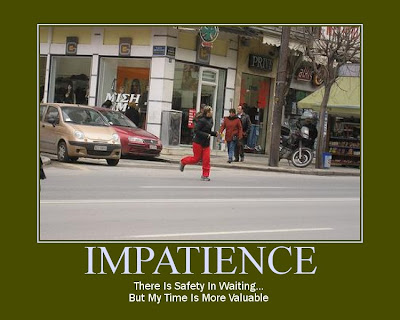 Remember how I can’t stand big box stores because I allow them to make me sleepy? Well, yesterday I went to one, but this post isn’t about that. Its about what happened on my way over to the store.

See, I parked my car and as I crossed the lanes in the parking lot to get to the door, I saw a truck heading my way. It was going slow, mind you, and stopped for me to cross the road.

So I crossed, but I noticed something about the way I did it. I scurried over to the other side as fast as I could. You know what I realized?

I presumed that the person behind the truck was impatient.

This got me thinking: Are we really this impatient? Have we accepted impatience as part of our culture?

Take a look around you. Everyone everywhere is trying to do things faster. We have faster internet, but even that isn’t fast enough, so we upgrade to the next fastest speed (Wireless G to Wireless N and so on). We want our mobile phone internet to be faster (EDGE to 3G). We want our food to be brought to us within a certain amount of time, because waiting too long for food is unacceptable. People get impatient with their children so they yell at them. And traffic, well let’s not go there, shall we?

So what the heck happened? How did we get so caught up on being impatient?

Because somebody somewhere said that time is money. That somebody was Benjamin Franklin.

So from the inception of this great nation, our culture has been told to be impatient.

And you know what? It shows.

Take a look at relationships. People are impatient about sex, so they have it with whoever they’re interested in as soon as they can. They rush into relationships as a result, and pick up the pieces to figure out how to work through the relationship after they’ve already moved physically into an act that can both give life and death simultaneously.

Yes that’s right, sex can kill you. Oh, the odds are probably in your favor, maybe. You could get an STD, but hey, that’s not going to happen to you, right? You’re smarter than that.

It can also give life. Children are created by “accident” all the time. But hey, don’t let me tell you how to run your life. You already know how to do that, don’t you?

You see, we as a culture expect things to go quickly and correctly the first time. How can things go well when you rush into them without thinking about them and taking your time to figure things out?

Maybe I’m wrong. Maybe people have realized that life is too short and that its best to be as efficient as possible in order to get the most out of it.

So what, Jim? Another rant? Fabulous.

Here’s my point: Sit down and think about your life. Think about the time you waste watching other people’s lives on TV, and then speed your way to work to get there on time. Think about how you’re using your time, and if stressing out about being impatient is really worth it to you.

To quote Larry Winget from Shut Up, Stop Whining and Get a Life (this is me paraphrasing), “Losers speed. Winners make enough time to get there without having to rush.”

What I’m trying to say is, being impatient gains you nothing. Stuff takes time. Deal with it. Its in the Outside World; stuff you can’t control. What you can control is how you spend your time, which is part of your WATER. If you’re sitting in traffic honking your horn at people because they don’t go the millisecond the light turns green, then you’re not controlling your time well enough. Or you’re making bad choices about your time.

Oh, and by the way, impatience leads to health risks like Hypertension and High Blood Pressure according to the National Heart, Lung and Blood Institute. Apparently Hypertension is a big factor in heart disease, kidney disease, and heart failure.

So yeah, impatience can kill you.

If things aren’t going fast enough for you, then maybe you need to slow down to appreciate life and recognize where you are right now.

To quote Ferris Bueler: “Life Moves Pretty Fast. If You Don’t Stop and Look Around Once in a While, You Could Miss It.”

Am I wrong? Talk to me people.